Past several years perovskite solar cell (PVSC) technology has been the most exciting feature in the solar business. Various researches show that its efficiency, low cost, easy manufacturing and other qualities make this technology extremely attractive in the light of silicon-based production domination. Experts believe that when developed fully, PVSC can be the game changing technology. But the question is not only when – it is also how.

Perovskite efficiency spiked dramatically from 4% up to 22% since 2009.

Matas Rudzikas, researcher at Applied Research Institute for Prospective Technologies and co-worker at Metsolar, is studying perovskite solar cells and materials. He explains that perovskite is a mineral, composed of calcium, titanium, oxygen in the form CaTiO3, first time found in the Ural Mountains by Lev Perovski. Perovskite structure is called everything with the same ABX3 generic form and crystallographic structure as perovskite’s mineral.

What is behind these names and forms? M. Rudzikas says that wide range of possibilities lies within this technology. “The PVSC has a lot of nice features to admire. Firstly, perovskite solar cell layers can be deposited from solution that allows the use of well-known industrial roll-to-roll (R2R) manufacturing technologies, that are cheap, fast and simple. Moreover, PVSC-based technology can be lightweight, semitransparent, made of different colors – pretty good looking.”

And that’s not all – there is one more and by far the most important thing why it is reasonable to consider perovskite as the solar business future. It is PVSC efficiency. Since late 80’ within 20 years silicon efficiency was gradually rising from 15% to around 25% and afterwards it has grown a little bit more. Whereas development of PVCS technology was way more rapid. Since the end of 00’, only within few years its efficiency spiked dramatically from 4% up to 22%.

M. Rudzikas says perovskite technology continues to be developed quite rapidly. For example, this year 12.6% record energy conversion efficiency was reached by „Soliance“ during a scale-up process of PVSC using R2R technology. 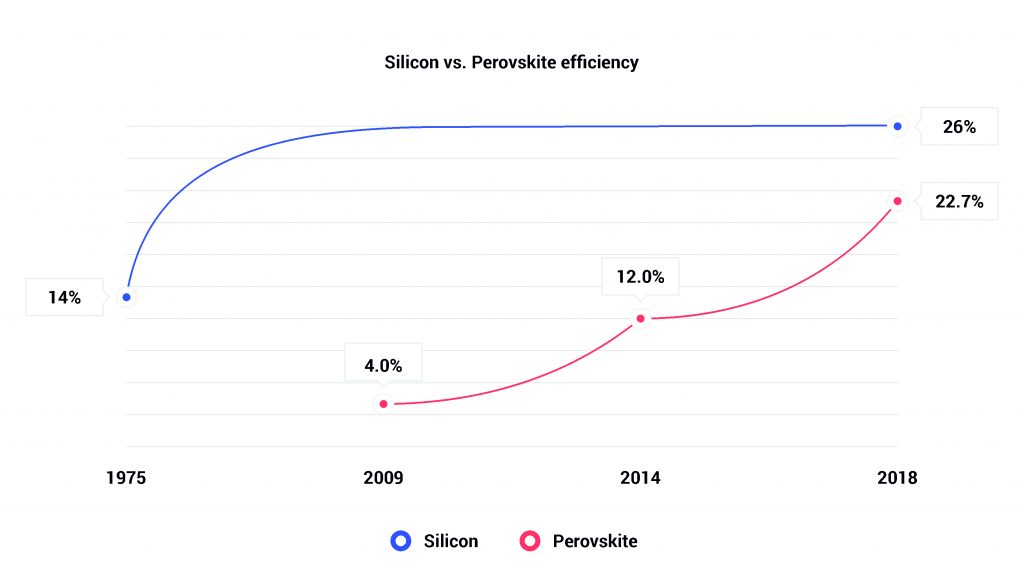 Tandem cells with silicon and perovskite is a promising research direction.

The competitor or the partner for silicon?

Seeing the progress of PVCS, interesting questions emerge. One of them – will it change nowadays widely spread silicon-based technology and if yes, when? But some experts raise even more intriguing question – if both materials can efficiently be used together. Researcher Matas Rudzikas claims that nowadays silicon industry is huge, technology is pretty well developed and saturated, but if PVSC technology progress is successful it can cut its piece of the market. Or even gently integrate into the whole due to wide possibilities for applications of this technology.

“Perovskite can be merged with a silicon in a special technological structure called “tandem cell”. It is known that solar modules containing more than one energy harvesting material can have a higher theoretical efficiency limit. This combination is like a sandwich, where different layers have different tastes, and combined into one gives exceptional result. Different layers absorb different parts of solar spectrum, what theoretically and practically is more efficient. So, mixing silicon with perovskite is a promising research direction for reaching high efficiency at low cost”, – M. Rudzikas explains. 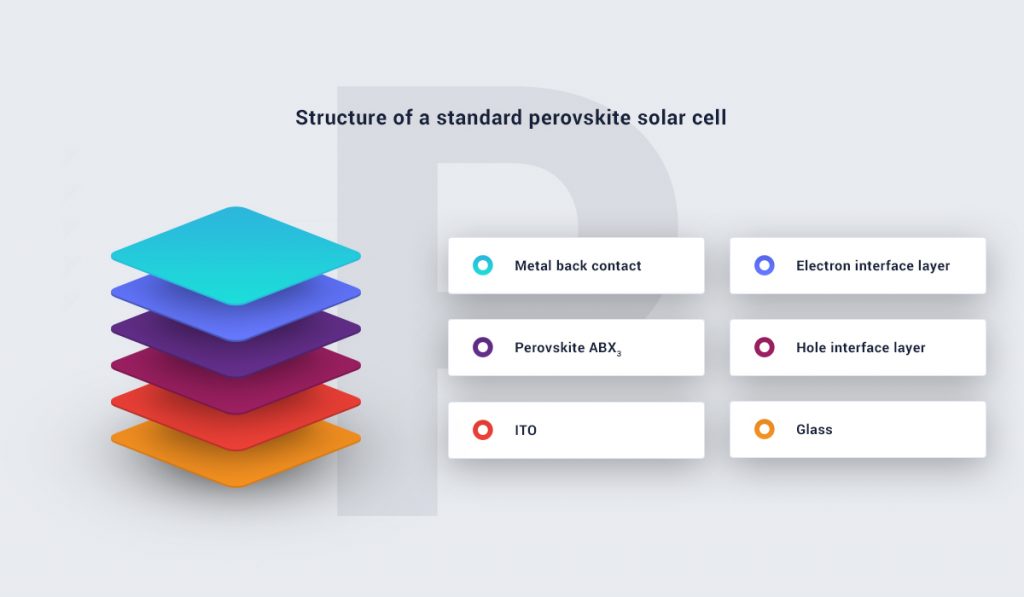 Commercialization process is beginning, yet some drawbacks are holding it back.

Perspective but not reliable yet

However, the future is as bright as challenging. M. Rudzikas says that “commercialization process of PVSC is already beginning, however it is still quite slow as some drawbacks are holding it back: poor stability, environmental compatibility, current state of small scale-up efficiencies achieved and high cost”.

He adds that most problems come from halide iodide (MAPbI3), formamidinium halide iodide (FAPbl3) perovskites and Spiro-OMeTAD (C81H68N4O8) hole transporting material – they are degrading under the exposure to moisture, heat or prolong illumination in air. There are even more issues.

“Pb is toxic and alternative lead-free perovskites are under research for replacement. Spiro-OMeTAD needs to be doped in order to achieve desired conductivity and it also causes stability issues. Moreover, Spiro-OMeTAD is an expensive material and complicated to process.

“Today this technology is high risk-high profit type of solution if it will go to commercial applications. There are still many issues to be solved, such as durability of devices, etc. but in case of success, company can gain significant competitive advantage in solar market”.

He also adds that Metsolar already invests in this technology development and predicts that it might take several years until technology would be mature enough for market penetration.

Not only business is waiting. People are waiting too, because successful development of perovskite technology would make solar energy mainstream – easy to implement and low cost, Metsolar CEO believes.

One way or another solar will be the ultimate source of energy for mankind.

“My opinion is that one way or another solar will be the ultimate source of energy for humanity in the long run as it is now for biosphere. Solar in some regions (Africa and other so called Sun belt regions) is already the cheapest source of electricity, therefore if perovskite will bring costs of energy down by order of magnitude (as these are the expectations) there will be no other technology that will be able to compete with solar”, – J. Ulbikas thinks. 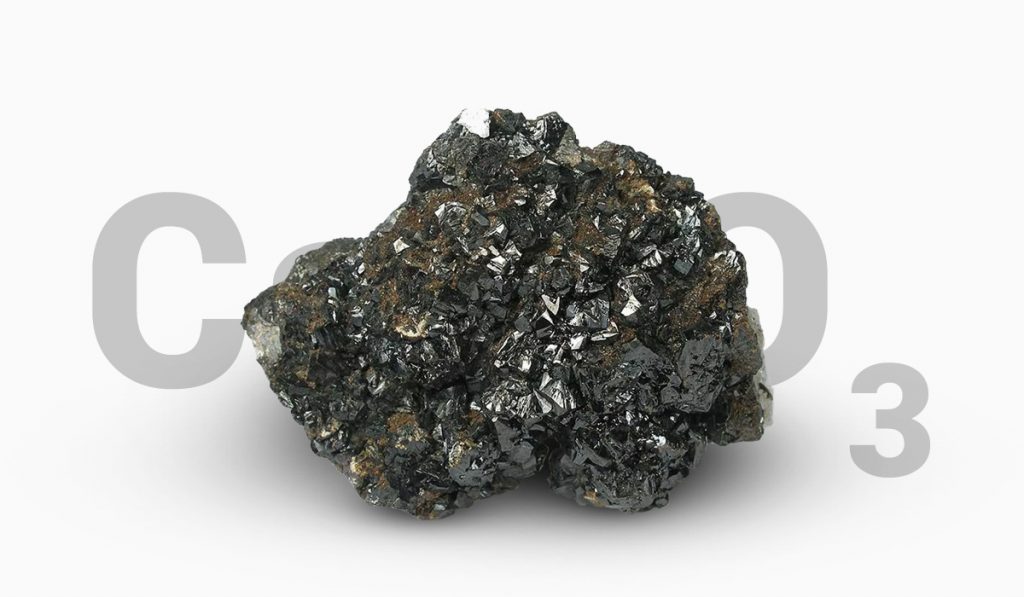 Customer needs are yet most important

While perovskite solar cell technology is under a purification and silicon based production still dominates, Metsolar CEO J. Ulbikas strongly believes that there are more important things to be aware of. It is how these technologies meet customers requirements and expectations as final products.

“I think adaptability and flexibility to customer needs are more important than the type of technology. And this is exactly what Metsolar fingerprint has been. We are focusing on bringing desired by customer features and believe that’s the future of solar business”, – concludes Metsolar CEO J. Ulbikas.