How much does really BIPV cost?

Building Integrated Photovoltaics (BIPV) is a rising technology with great potential for reducing the carbon footprint and electricity bill of a building. BIPV represents financial benefits for the building, but it also means a high upfront cost surpassing that of traditional façade.

Cost is one of the most important factors to consider in BIPV systems. In this article, we break down the cost for the hardware and soft costs of a BIPV installation, analyze operation & maintenance costs, and even provide you with extra recommendations to reduce cost and increase gains at a building with a BIPV.

What is Building Integrated Photovoltaics (BIPV)?

Building Integrated Photovoltaics (BIPV) is a technology that provides buildings with the ability to generate solar power without disrupting the aesthetic of the architectural design. The technology integrates photovoltaic (PV) modules into the skin of a building, replacing the façade and pitched/flat/curved roofs.

Some BIPV applications include metal PV modules or solar shingles for the roof, customized sized PV modules with aesthetic design for the solar façade, photovoltaic windows replacing glazing and PV skylights for the building, and other adaptations of PV that integrate into the skin of the building.

On a general basis, the cost for most BIPV products can be found in price range going from 200€/m2 – 625€/m2. The overall cost for a BIPV system can be broken down into two categories: hardware and soft costs. In this section, we will explain the breakdown cost for each category and subcategory.

The hardware costs of a BIPV system include tangible (hardware) structural and electrical components required for the system and installation. This category is subdivided into two: BIPV modules and Balance of System (BOS).

The cost for PV modules represents around 43% to 77% of the PV system cost. The major aspect varying the cost is the technology used for the BIPV modules. The average price for an European BIPV glass glass module rounds about 120-250€/m2, whereas the minimum price for standard European glass-glass module can be as low as 95€/m2. But if you are looking for a one-of-a-kind result for solar exterior customization, the price can go up to as much as 380€/m2.

The inverter is a very important component in the BIPV installation. The cost depends on the technology chosen, varying between central inverters (0.13€/W), string inverters (0.17€/W), or micro-inverters (0.35€/W).

The cost for storage systems is another expensive yet important BOS component. The most recommend technology is Lithium-Ion, which costs around 534€/kWh, but it is estimated that the price will be reduced to 202€/W by 2030.

Other BOS components include charge controllers, meters, cables, AC/DC isolators, and others. There is little cost research about these components for BIPV systems. Depending on the mounting hardware technology and quality, the price could be reduced for low requirement installations or increased on the contrary case.

Soft costs include any expense that does not translate as a hardware component. Soft costs are divided into the following categories: design, procurement, construction & installation, permit, inspection, interconnection (PII), and disposal. These costs are highly site-specific and vary a lot depending on the country. In this section, we explain each of them.

The proper design of a BIPV system is the first stage of the process, which is one of the first costs to consider. Design costs include doing the site survey, making preliminary designs, preparing reports, and other tasks required to design the system. For instance, a study case of an 11KW Polycrystalline BIPV roofing system in Italy had a design costing 0.29€/W.

Procurement costs involved in BIPV systems represent site visits, transportation, contract negotiations, renting storage space for components, and similar expenses in the process. On average one could expect transportation costs for standard solar PV modules 0,5-2%, and for custom solar modules 1.5-8% of PV module cost., but this can vary depending on the region.

Construction & Installation represents an important cost for BIPV systems. While it is hard to estimate its cost across Europe, these expenses include skilled labor, supervision hours, consulting, health & safety contingencies, and other costs related to the construction of infrastructure and installation of the system.

Permit, Inspection, and Interconnection (PII) of a BIPV system represents significant soft costs that vary between countries. PII costs translate as fees required to approve the installation, staff hours to prepare interconnection for the BIPV system to the grid, site inspections, and similar expenses. A study case Germany installation places administrative costs at 0.01€/W and other PII costs at 0.055€/W.

Disposal costs are not always considered during the 30 to 50 lifespan years of a BIPV system. Expenses in this category translate as costs for dismounting, transporting, and disposing of (for recycling) BIPV systems. Since BIPV technology is fairly new and most installations are operating, these costs have not been widely researched.

The estimated cost for a BIPV façade varies depending on the type of BIPV product, with a price ranging from 200€/m2 – 625€/m2, delivering a payback period of 10 – 15 years in Europe, this surpasses non-active facades and regular roofing, especially since these options do not have a return of investment (ROI). Other options include installing roof-integrated thin-film BIPV systems, which cost an average of 134€/m2. 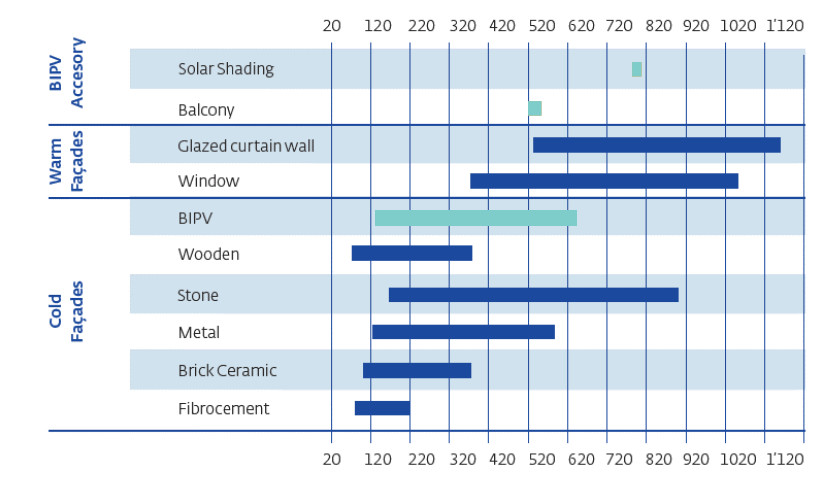 To understand the meaning of these prices, it is important to compare them against the cost of non-active facades. Two important BIPV accessories are solar shadings and solar balconies, which can replace regular balconies and the roof for them. The BIPV balcony costs around 520€/m2, and the solar shading rounds up the 800€/m2. 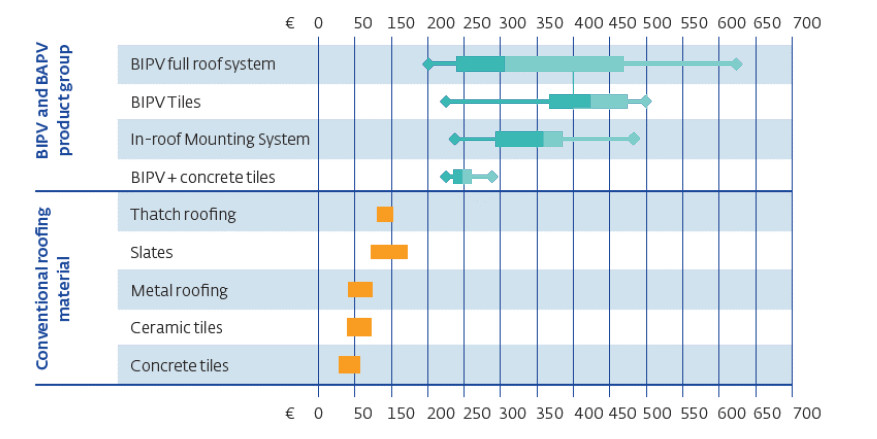 On the other hand, as can be seen in figure 3, the cost for conventional roofing is much lower when compared to BIPV roofing options. Some conventional roofing materials like metal, ceramic, and concrete tiles, can have prices ranging the 25€/m2 – 100€/m2. More expensive options include thatch roofing and slates which have costs going from 100€/m2 – 175€/m2. 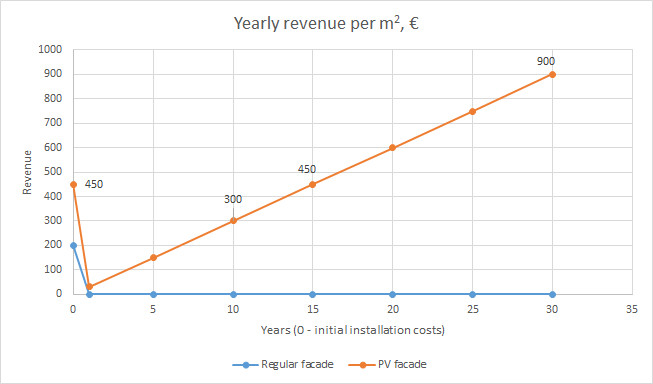 It is true that the upfront investment required for BIPV facades and roofing, tends to be much higher than for non-active options, but it is important to also look at the revenues. During 30 years, a BIPV system costing around 450€/m2 could have a ROI of 15 years and produce savings of 450€/m2 for remaining 15 years of the systems lifespan. Where solar roofing ROI can reach approximately 8-12 years of payback time. Considering that non-active facades and regular roofing produce 0€/, the most wise investment is clearly using BIPV technology.

Operation & Maintenance (O&M) costs include hardware and soft costs, which is why we place this category separate from the rest. O&M costs for BIPV include monitoring the system, repairing components, and other costs arising due to unforeseen situations like vandalism, fires, extreme weather events, and others.

O&M costs are estimated at 0.5% of the initial investment, but this considers ideal circumstances with regular maintenance and operability. O&M costs differ when mainstream PV power plants, BIPV or rooftop (BAPV or solar roof tiles) are taken into consideration. In cases, where O&M software is being used the efficiency and yield of such solar plants increases greatly. Let alone the fact, that maintenance work is triggered only when such software indicates the demand for such services, this concludes in lowering overall O&M costs.

Another cost to be considered is the regular replacement of the inverter, which is performed every 15 years and represents a cost of 10% of the initial investment.

BIPV systems require a considerable upfront investment, which is why we recommend reducing overall installation expenses and looking for methods to optimize gains, ensuring the best cost in the long run. In this section we provide you with some aspects to consider when designing and operating a BIPV system:

Reduce cost for replacing batteries by using the recommended Depth of Discharge (DoD).

Final thoughts: is BIPV worth it?

Installing a BIPV system in Europe, costs in average 200€/m2 to 625€/m2, delivering a ROI of 10 to 15 years. Depending on the cost for electricity, the final cost for the installation, location of PV plant and a few other factors, the payback time time for BIPV can be reach 6 years. A BIPV system does not only represent a source of power to reduce electricity costs for the building, but it also represent a source of income.

Source: Income of a BIPV system

With the information in this article, you can understand better the upfront cost investment for a BIPV system, and every other aspect involved in the budget. This will provide you with enough information to estimate the cost for a particular system and consider the different aspects of the installation.

By using our considerations when designing a BIPV building, you will reduce BIPV costs and increase gains to the maximum. This will make the BIPV system even more profitable, and it might even provide it with a longer lifespan.