Majority of people who‘s reading this article lives in an ordinary city – where transportation systems tend to jam, wastes pollute environment, energy in whole infrastructure is used inefficiently, social togetherness is decreasing. This is what we got used to in the last couple of decades. However, let‘s make a step aside and have a walk through the future of cities – a smart city, which slowly but surely becomes reality.

For the past ten years smart city‘s idea is getting more attention than ever. It is a city where almost all parts of life are improved with ICT solutions to make it safer, resource-oriented, environmentally friendly, more energy and cost efficient.

Smart city conception is mostly organized into three major fields: innovation economy, urban infrastructure and governance. The first one is oriented towards innovation in industries, clusters or city‘s regions as well as providing proper education and experts in the work area. The second one is for transport, energy efficiency and environmental protection. The third one aims at better governance experiences for citizens – participatory and direct democracy, better services.

Smart city idea is gradually spreading all over the world. Well known cities like Amsterdam, Manchester, Southampton, Barcelona, Madrid, Stockholm, Vilnius as well as cities in Singapore, China, India works on making smart city concept a reality and towards more quality lifestyle for its residents.

Thanks to wildly innovative IoT (internet of things), smart cities aren’t just a dream of the future.

That wouldn’t be possible without strong concepts of IoT (internet of things) and BIM (building information modeling) implementation. Such technologies not only allows you to collect, share and analyze millions of data from thousands of connected devices via internet, the same devices enable you to project, build, control and maintain new buildings in smart and productive way.

To understand how it is put into practice, let’s take an example of Amsterdam. The capital of the Netherlands has been running The Amsterdam Smart City initiative since 2009. The agenda includes more than 170 smart-city oriented projects sustained by wireless devices to be able to make real-time decisions. These projects aim on reducing traffic, saving energy and improving public safety. One of them works directly with all of them – smart lighting system.

It allows municipalities to control light intensity in the streets with smart traffic monitor. Such technological solutions bring ability for transport experts to control traffic jams and inform people about the best routes while in the pedestrian area – to dim or brighten lights based on its usage.

Contributing to the process

„Metsolar“ recognizes the need to work on building smart cities and has been taking its part in it for a decade. As it was mentioned earlier, Lithuanian based company has already been collaborating successfully with Danish enterprise Alfred Priess A/S in making intelligent solar lighting systems.

„Metsolar“ has provided custom solar solution for Alfred Priess A/S Skyline street lighting series. Made based on smart city conception, Skyline is implemented with WIFI, camera, CCTV, loudspeakers, EV charging, all based on solar energy. To make that possible, “Metsolar” had to use their best approach. Elongated shape modules for hexagon solar street pole were designed to meet high power and longevity requirements. Therefore cells were precisely cut to fit extraordinary form of a pole and still produce enough efficiency. Additional upgrade of a module was done to enhance water resistance and to allow modules to work properly even in harsh environment.

Having experience with customized solutions, “Metsolar” also has been taking part in EU funded project SmartFlex, which focuses on providing totally new perspectives to BIPV industry, making integrated solar panels unique and one of a kind.

An example of that is an office building in Lithuania with 600 m2 solar façade. Customly arranged solar grid alongside glass / glass modules with blend-in design solutions printed on the top of a module were located on south and west side of the façade. What makes this building fascinating is that the team used as many as 15 different types of glass /glass modules used up to 3.5 and as wide as 1.7 meters. 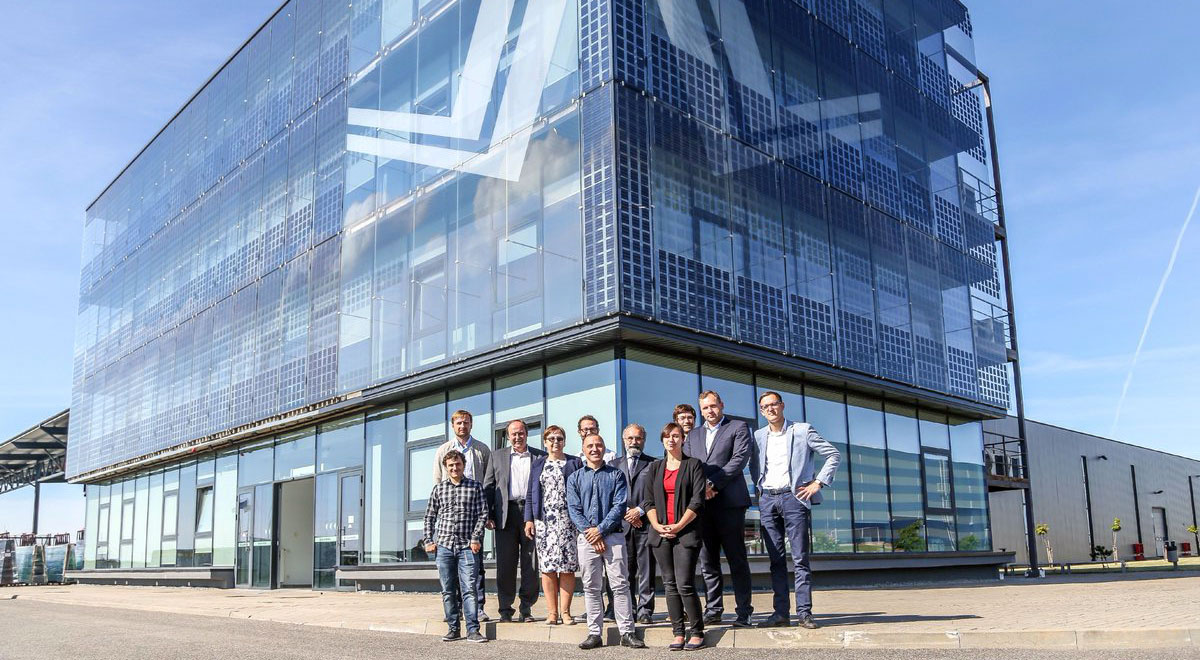 The uniqueness of the SmartFlex solutions is the design freedom. Architects can work with confidence on specifically design oriented projects, because solar modules can be any size, color scheme, shape and still produce efficiency wanted. More so, this solar façade has competitive price per square meter in comparison with stone or metal, and is way cheaper than windows – the estimated cost for energy active “second-skin” façade is around €550 per m2. This project obviously meets smart city conception requirements and is a true example for future buildings.

Smart city conception is the future of cities. Full of smart, innovative, environmentally friendly, energy efficient solutions, it brings better living experience. However, challenges are already here. Present and future generations will have to adopt to the new way of thinking, countries all around the world will need to re-think its course, economy and social models. New vacancies as well as new professions will emerge, people likely to face difficulties in re-qualifying themselves to the changing needs of work industry. Thus, as smart city idea is gradually spreading all over the world, it’s best to start thinking about our contribution to it today.