What are tandem cells? Introduction to solar technology. Part 3

One of Metsolar goals is to extend your view on what benefits solar oriented lifestyle can bring and how various solar related technologies work. We already introduced you to important topics, like what are photovoltaics, solar cells, solar panels and batteries. We have also discussed what is future of solar market, including the technology of perovskite. Today we would like put focus on tandem cells – significant and very promising technology in solar world, definitely worth our attention.

Researchers: two is better than one

Tandem cells of various configurations today are on the agenda of many research teams all around the world. The technology is interesting and promising, as it seeks to overcome theoretical limits for single cell efficiency (~30%). Will tandems be a commodity product on the market anytime soon? What kind of issues tandem cells faces today and what kind of tandems can we expect? It can be any combination of existing solar cells based on Si, GaAs, CIGS, Perovskites, etc. But first – let’s get a closer look at this technology and the history behind it.

As scientists always look for more efficient ways to improve existing technology or some process, tandem cell is the result of that. More than 50 years ago William Shockley and Hans-Joachim Queisser made an interesting discovery what’s now called Shockley-Queisser limit – they theoretically calculated that solar panels with only one single layer suffers efficiency limitations as they are unable to absorb solar light in its fullest.

Blue is part of loses from energy that has been absorbed, but converted into heat (when photon has higher energy than a bandgap of semiconductor, all part of energy, which is above, goes to heat);

Pink shows loses due to too low energy of light photons to create charges (energy must be same or higher than a bandgap of semiconductor).

This became both a scientific and technological challenge. So, scholars all around the globe were looking for ways how to increase the efficiency level and found that two or more sub-cells are able to harvest more of the sunlight radiance and turn it into electricity, thus the cell’s efficiency can be increased. How it works, Rainer Klose from Swiss Federal Laboratories for Materials Science and Technology explains in more detail:

“What is true for double-blade razors is also true for solar cells: two work steps are more thorough than one. Stacking two solar cells one on top of the other, where top cell is semi-transparent, which efficiently converts large energy photons into electricity, while the bottom cell converts the remaining or transmitted low energy photons in an optimum manner. This allows a larger portion of the light energy to be converted to electricity.”

Tandems can be grouped by materials used – organic, inorganic and hybrid

The variety of tandem cells

There are several types of tandem cells that can be grouped mainly depending on materials used – whether it is organic, inorganic, hybrid and then classification goes deeper of what kind of connection type is used for sub-cells – stacked, monolithic or optical splitting. Compounds of tandem module with silicon here are separated as to show their perspective and high results.

Organic photovoltaics goes straight in making cheap cells, with small or medium efficiencies. Tandem cells with only polymer materials have power conversion efficiencies of less than 10%. This kind of solar cells are expected to reach around 15%. These tandem cells are mostly favorable due to cheap production and semi-transparency. However, such pros give you one important con – low efficiency.

The only commercial tandem cells to our knowledge are made from III-V group materials, that are sometimes called mother and father of the technology. Mainly because III-V semiconductor compound solar cells have been leading in conversion efficiencies since the start of single junction solar cells and tandem cells made from these materials were steadily increasing too. The world-record efficiency of 3 junction cell comprises of GaInP/InGaAs/InGaAs, which reach 44.4% efficiency under 302 suns, whereas a four-junction GaInP/GaAs; GaInAsP/GaInAs reach 46.0% at 508. These type of cells (little less effective than these laboratory world records) are used mainly in space applications, like satellites or with difficult and expensive concentrator systems, because of very high price yet highest efficiencies.

What are benefits of inorganic tandem cells? Very high efficiencies, bandgap tunability by elemental compositions in alloys (bandgap is a semiconductor property showing what minimum energy is needed to move electron from valence band to conduction band), good range of lattice parameters (lattice is a network of atoms in crystalline material) and bandgaps to choose from, higher photon absorption (because they have direct bandgap, simply meaning, that it is easier to absorb light than in indirect semiconductor like silicon), higher resistance against high-energy rays in space, smaller efficiency degradation by heat than Si solar cells. Quite a lot, huh? However, there are minuses too: very expensive and these structures are complex to manufacture. 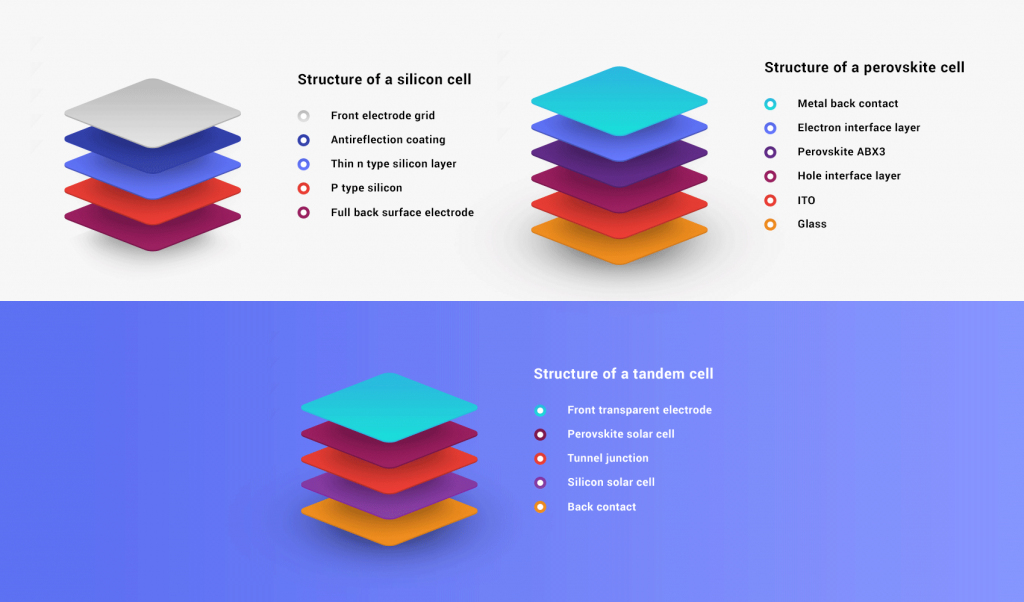 Hybrid is the third type of tandem cells. It is where the solar industry perspective – perovskite – steps in. Perovskite tandem has already proven to be quite efficient and low cost, mostly because of cheap materials that are being used. This combination also has strong optical absorption and long diffusion length and ability to be printed by roll-to-roll technology. On the other hand, as perovskite is still developing, its stability is questionable, thus perovskite tandems also suffers from this issue as well as recombination losses, bandgap optimization and transparent conductive oxide reflections and parasitic absorbance.

In the light of hybrid type of tandem, it is also worth mentioning DSSC – dye sensitized solar cells – which has promising future. It is an example of different view to solar cells, with a quite interesting structure, partial transparency and low price. These cells are being used for semi transparent and flexible modules, but still are in an early commercialization stage, mostly due to lack of efficiency.

Using them in tandems has many perspectives, because it also has a big potential to reduce price of solar industry, can be flexible and semi-transparent. Efficiencies of these tandems here range from 8 to more than 17%:

Even if DSSC has an interesting prospects, it is still the product of future. On the other hand we have tandem with silicon which brings interesting results today. It was found, that silicon mixed in tandems with III-V group materials, CZTS, CIGS, perovskites, polymers produces promising outcomes.

Problems with tandem cells yet to be solved

Tandem cells of various configurations today are on the agenda of many research teams all around the world. There is a bunch of problems of various complexity with tandems yet to be solved. Let’s cover few sets of them.

First and most important set of problems to be solved when introducing these devices is layer compatibility. Researchers are focusing on material compatibility issues of top and bottom solar cell. What it means?

Lack of technological solution for manufacturing

Second set of the problems is related to technological solution, which means that:

And third set of problems are related with cost efficiency of proposed tandems. Logic behind of introducing tandems is to overcome theoretical limits for single cell efficiency (~30%) but it must come in cost competitive price comparing to such mature technologies like Si based solar cells.

So, can we expect tandem cells in the market any time soon?

Although tandem cell technology is a promising technology, yet it is clear that we will not see them as commodity products on the market in the near future due to number of issues to be solved before this technology will mature to the level of commercial product. Today Si based devices are becoming the cheapest energy generation option – therefore it will be really difficult to beat them in the nearest future.