What is agrivoltaics? How can solar energy and agriculture work together?
Going solar, Industry news

What is agrivoltaics? How can solar energy and agriculture work together?

Within past recent years PV technologies has sprouted dramatically. A lot of social actors – business, households, cities – acknowledged the environmental necessity and profit out of it and decided to implement it in their own fashion. It happened in farming too. The famous notion of solar farms aroused followed by a controversy.

Solar farm is a field filled with hundreds or maybe thousands of solar panels oriented into the sun. Instead of potatoes, beans or tomatoes planted in the soil, solar panels covers that land, while energy is being produced.

It’s obvious that traditional farming is relatively risky business because one is very much dependent upon the weather conditions. If there is just the right amount of sun, rain and if there are no extreme storms, strong winds and etc. Thus, not to worry about all these environmental factors and still get income is really uplifting and a bit too good to be true. Therefore, next to power generation, solar farms found another niche – agrivoltaics (or in other words APV). It is an amazing idea for environmentally conscious world, both agribusiness and society.

However, it might haven’t happened if traditional farming wouldn’t be failing.

Since 2010, when the cost of installing solar systems has dropped more than a half, solar farming started to bloom. Karlee Weinmann, a researcher at the Institute For Local Self-Reliance (ILSR), explains to Digital Journal the situation on American farmers why they chose to replace crops with solar arrays: “The prevailing reasons farmers decide to replace crops with solar are because the farmers are getting older or because it’s easier and more lucrative.” 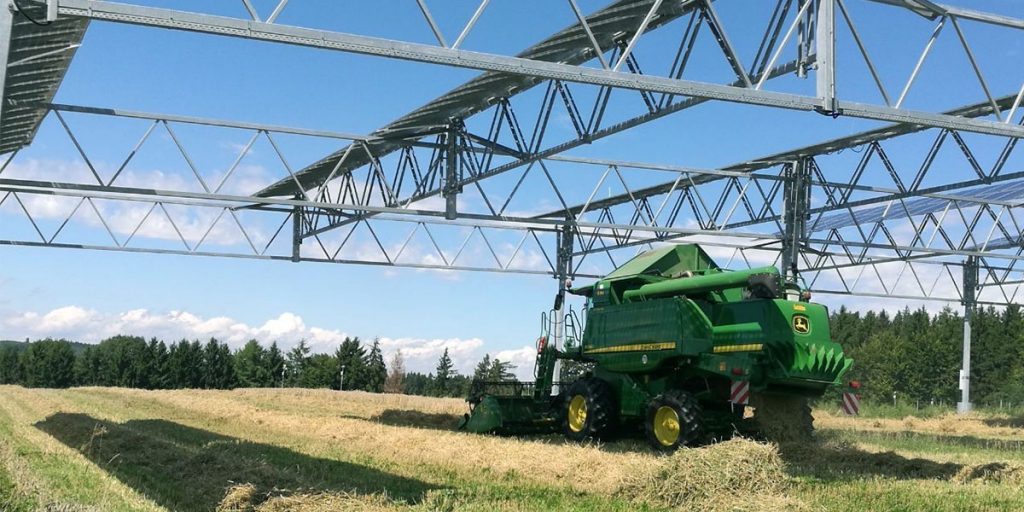 Now, we see its consequences: the more solar farming, the less food is grown. And that makes sociologists and economists worried. On one hand, we have renewable energy produced, on the other hand – if a field is given to PV technology, it basically means less food is grown which can have important impact for society and nature’s ecosystems. So, is there a way out? Or is it better to stop solar farming altogether and increase regulations for this field?

Neither of these options sound as good as the idea that solar technology and traditional farming can work hand in hand.

Agrivoltaic – the future of farming?

A team of French scientists lead by Christophe Dupraz were the first to use term agrivoltaic. It basically means when solar panels and food crops are combined on the same land to maximize the land use.  It’s an idea which could bring food producing to the next level. Their research field in Montpellier, France, indicated that agrivoltaic systems may be indeed very efﬁcient: the increase of global land productivity can be from 35 to 73 percent!

Fraunhofer Institute’s For Solar Energy Systems researchers carried out the study about the same topic. Their goal was to find out how solar radiation and food crops can be used and ended up with synergic solution.

The examination took place near Lake Constance which borders Switzerland, Germany and Austria. For one year the pilot project used 720 bi-facial solar modules which covered around 1/3 of a hectare. Researches decided to mount the panels high enough, so crops receive almost the same amount of sunlight as if they grow naturally. This also helps as proper farming technique could be used. 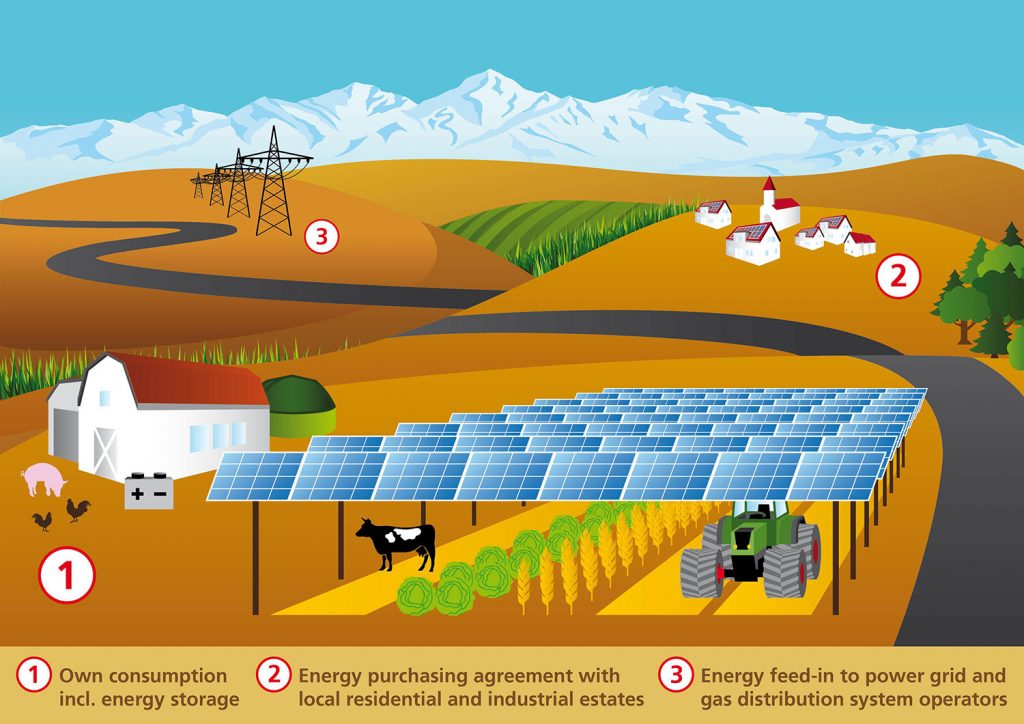 Results speaks for themselves

When all calculations were done, promising results appeared. Researchers discovered that land’s productivity could be raised by 60 percent. “The project results from the first year are a complete success: the agrophotovoltaic system proved suitable for the practice and costs as much as a small solar roof system. The crop production is sufficiently high and can be profitably sold on the market,” explains Stephan Schindele, project manager of agrophotovoltaics at Fraunhofer ISE to Digital Journal. 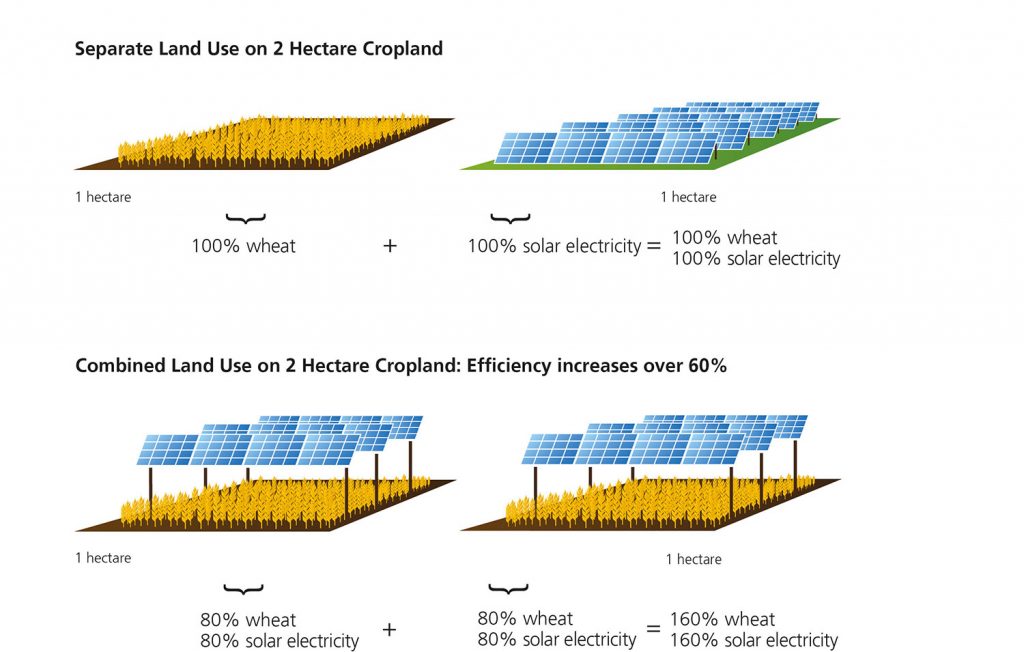 The examination proved that farming and PV can be compatible. It reduces competition for land and works efficiently too, while providing additional income for farmers.

The last point is worth additional emphasis. As discussed above, one of the main reasons why farmers move to solar farming is a guaranteed financial gain and stress-free lifestyle. Fraunhofer Institute’s researches discovered that PV installation can work along with traditional farming and bring income even if nature’s conditions are incompatible grown culture’s needs.

With booming solar industry and applications, it’s being used – agrovoltaics is one of them. Let alone incredibly higher land efficiency with solar modules being placed on top of growing crops, the greenhouse farming industry has its way to go solution: skylight solar glass. With partial light transmittance achieved by differentiating solar cell arrangement and placement, not only shading can be achieved but energy demand can be reduced drastically of such agrivoltaics greenhouses.

So we believe agrophotovoltaic is a new way of using solar technology together with traditional farming. Of course, it still needs some discussions, testing and further development, but today it is obvious that such method – solar farming in its true sense – has big perspectives to benefit society and business more than it has ever been before.